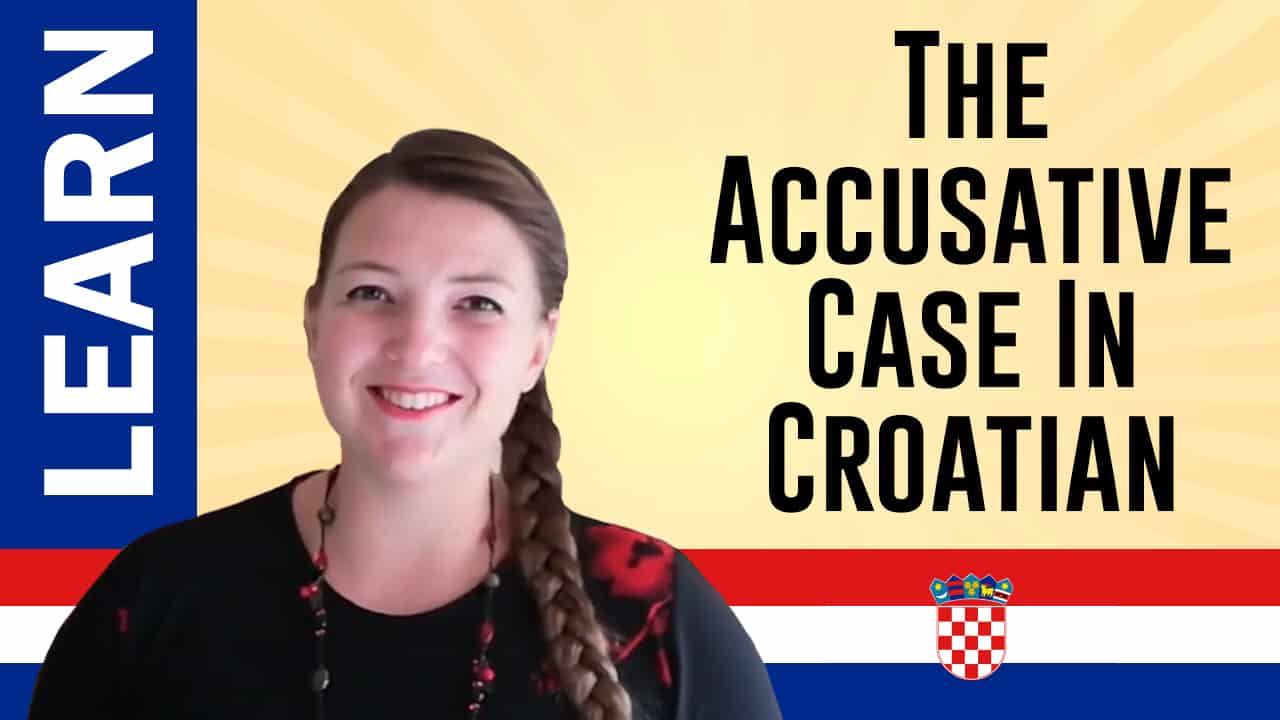 Are you ready to learn how to use the Accusative case in Croatian?

This is one of the most commonly used cases in everyday speech and there are a couple of things you can pay attention to when forming your own sentences.

In this article, I will cover this fourth grammatical case and help you understand when and how to use it in your everyday speech.

How to Form the Accusative Case

Before we dig deeper into the use of this case, let’s learn how we can transform a noun from its basic form (Nominative) into Accusative.

It will be good for you to familiarize yourself with these forms before we start looking at more examples of the Accusative case because the more you read it or hear it, the easier it will be to use it later on.

The best way to learn grammar is to gradually recognize the different endings in reoccurring grammar features of the sentence, and so learn grammar automatically, without actually memorizing any “rules”.

So, let’s start getting familiar with the shape and form of the Accusative words.

The Endings of Accusative Nouns

If you do want to memorize the endings, the easiest way would be to first become comfortable with determining the gender of the noun.

In our article about the grammatical genders in Croatian, you can learn how to do this.

Now, the trick is that there are several nouns which end on a consonant, but are not masculine but feminine, as the noun in the table – noć (night).

Let’s look at the form of the Accusative case.

*The majority of feminine nouns in Croatian ends on -a. However, there are several nouns that end on a consonant (which is usually the rule for masculine nouns). To learn more, take a look at our article about Croatian genders.

*You may notice a change in plural – dječak (sing.) > dječaci (pl.), instead of dječaki. These sound changes are very common in Croatian. Notice how the Accusative case goes back to the root of the Nominative singular form to make the Accusative plural form by adding the ending -e.

This happens because of the popular sound change in Croatian called sibilation. This sound change causes sounds k, g, and h to change into sounds c, z, s when they appear before the letter -i.

Therefore, in order to make the plural (dječaci) out of the singular (dječak), you need to pay attention to the sibilation:

The root of the word is still dječak. Therefore, the Accusative will use the root word and add the ending -e.

Nouns that have the same form for Nominative and Accusative

However, masculine nouns that refer to inanimate things also don’t change their form in the Accusative.

I drive through that town every day.

The Accusative keeps the same form as the Nominative for feminine and neuter plural nouns.

You have to visit Baćina lakes.

Nouns that change form in the Accusative case

For feminine nouns that end with an -a (which are most common), the Accusative ending is -u.

Notice that the vowel ending changes from a to u.

For masculine nouns (they end on a consonant) that refer to living beings, the Accusative ending is -a (same form as the Genitive case).

Let me quickly mention a noun dog. This is a masculine noun in Croatian. But, it’s declension from Nominative to other cases is a bit peculiar. Let’s check it out:

As you can see, this noun also gets the a ending in Accusative, but the base for this case and the other cases changes as well.

The form pas exists only in the Nominative case. In other cases, the base changes from pas to ps onto which the other endings are added.

Note: Masculine nouns have the same form in the Genitive and the Accusative case. Remember, to tell them apart, you need to think of their use.

The plural masculine nouns change the vowel ending into -e in the Accusative case.

To make things even more simple, the following rule will usually work for all the nouns:

The Endings of Accusative Adjectives

The adjectives have the following endings:

Regardless of which ending the feminine noun has, the feminine adjective always has the ending -u in the Accusative case.

The plural adjectives are easier to remember. Only the masculine adjectives change their form from Nominative to Accusative by changing the vowel ending from -i to -e.

All the other plural adjectives have the same form in the Nominative and the Accusative case.

The pronouns are particular and have somewhat irregular declension.

* Shortened form is used more often in sentences than the longer form.

**Note: In Croatian, there’s a difference when you’re addressing someone informally and formally. If you’re addressing someone informally you would simply say – ti, tebe, but if you’re being formal, or as a sign of respect, you wouldn’t use the form ti (you), but the from Vi (you – polite). In this instance, the pronoun is always written with a capital V.

Ok, now that we know how to transform the words into the Accusative case, let’s see when we will actually need to do that.

The Accusative Case in everyday speech

The Accusative case is the fourth grammatical case out of seven that exist in Croatian.

The Accusative case is therefore dependent on the verb in the sentence.

For this reason, after we identify the verb, we ask the questions in the brackets above – whom (koga) or what (što)? These questions actually help us determine the direct object of the sentence, as the image below shows.

Remember, once you identify the direct object in the sentence, you will most often have to use the Accusative case in order to express it correctly.

When to use the Accusative case?

As you have learned, the Accusative case is most often used as a direct object. It depends on the verb in the sentence and it can come with or without a preposition.

The Accusative case without the prepositions is quite common. It always comes with the transitive (prijelazni) verb. The transitive verbs are verbs that follow the pattern subject – verb – direct object.

Let’s look at this example:

Note: While in English you would write the names of languages with capital letters, in Croatian we don’t use capital letters because all these words are possessive adjectives which are always written with lowercase letters.

Moram kupiti kruh.
I have to buy bread.

I love the sea the most.

I’m waiting for you on the square.

The Accusative case with prepositions

The Accusative with the prepositions is normally an adverb. Usually it is used as a part of the adverb of place.

What you’ll need to look for in a sentence are the prepositions that are used with the Accusative case. These are:

Let’s look at the examples for each one.

I’m passing through a tunnel.

We’re walking through the forest.

We’re walking through the town.

Remember that the masculine nouns that refer to inanimate things don’t change their form in the Accusative.

Spustili smo se niz rijeku.
[We went down – are – ourselves – down – river(acc.)]
We went down the river.

We are walking down the street.

[Stand – against – wall(acc.)]
Stand against the wall.

Notice how in the phrase stand against the wall, the preposition against (along, next to) gets an extra “a” (uza)?

This happens because of the easier pronunciation. Since the preposition ends with z, and the noun begins with z, we add the extra “a” so that it would be easier to pronounce it.

Similar thing happens in British English when you can hear the speaker pronounce a sound “r” to make the pronunciation easier. This is commonly heard in phrases like Law and order. You will hear a British person say somehing like Lawr an’ order.

This is what adding the “a” does in Croatian as well, except that you also actually write the added letter, and not only pronounce it.

This is common for a lot of different prepositions when the pronunciation is hard because of the consonants that stand next to each other.

Now, there are a few things you need to keep in mind.

Just think of it this way – if there’s a verb of moving in any way (putting something on, running late, going somewhere, etc.) the preposition on will be followed by a word in the Accusative case.

If the verb is stationary, you add the Locative case.

There are many people on the train.

The same is true for the preposition u (in).

If you have read our article about the Dative case, you saw that the Dative case is also used with the verbs that express movement, more accurately, direction. The difference is that you use the Dative if you’re moving towards something or someone, but if you’re entering “into” somewhere, you would use the Accusative case.

Moving toward someone/something – use the Dative

Going somewhere, into somewhere, through something – use the Accusative

Being somewhere (not moving) – use the Locative

The Dative and Locative have the same form but a slightly different use. You can read more about it in the articles about the Dative and the Locative Case.

However, this preposition can also be used as the adverb of time.

We’ll see eachother in the morning.

Things were different in the past times.

The Accusative case will come with these prepositions when the verb expresses an action which is finished.

Let’s look at some examples.

Među – among, in the midst of

He fell among thorns.

Place the decoration above the table.

Pred – in front of

Let’s quickly recap these prepositions that the Accusative shares with the other cases.

Ok, that’s it! That’s all the basics that you need to know in order to use the Accusative case. Remember that the Accusative is most often used as the direct object.

I hope this article has been helpful! If you have any questions or comments, don’t hesitate to contact us. I’ll be here for you.