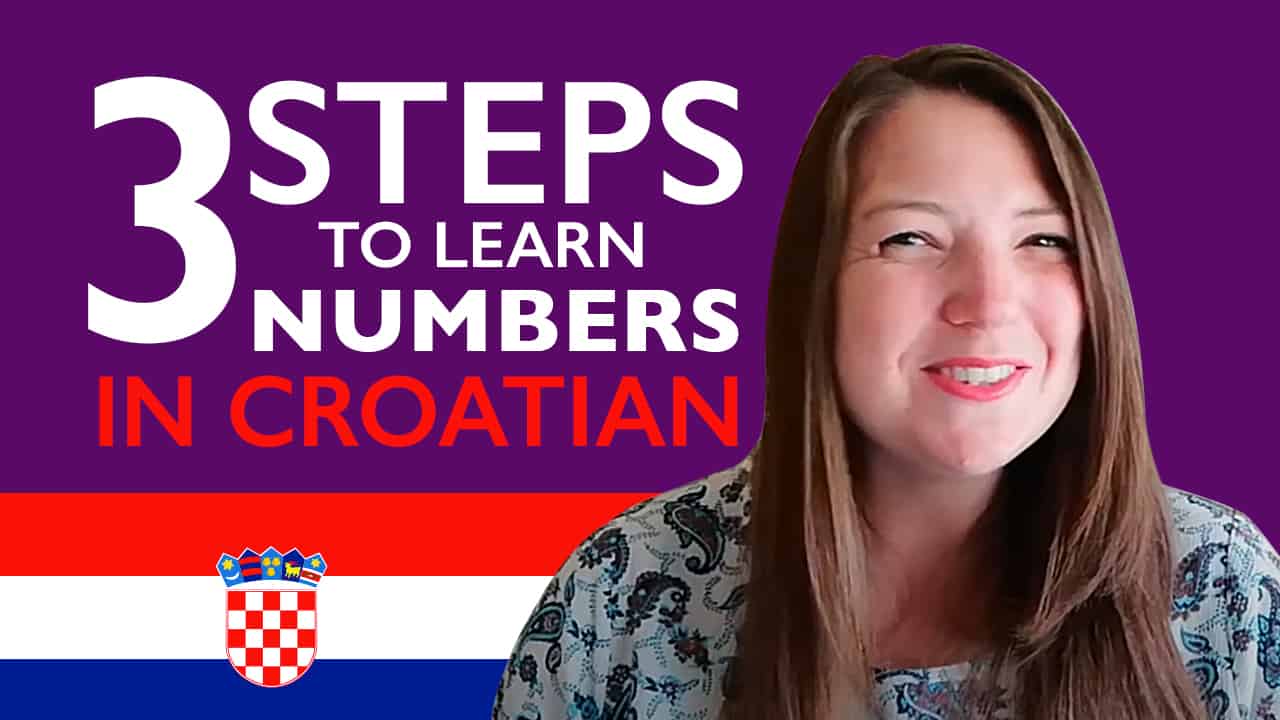 The numbers in Croatian are quite simple and easy to learn.

And, once you understand how the words of the numbers are put together, you will only need to memorize about 15 words to be able to count to infinity in Croatian.

Instead of simply giving you a list of words (let’s call them number-words) to memorize, let me share some simple tricks that will help you learn Croatian numbers and count in Croatian in no time!

First, check out this video and then I’ll explain more below:

Understanding how the numbering system works will help us memorize the number-words faster.

Learning to count to 10 is the basic start for learning numbers in any language.

Fun fact: Once you learn to count to 10 in Croatian, you will automatically know how to count in several other languages such as Bosnian, Serbian and Montenegrin! (These languages are very similar to each other and so are their numbers.) Who’s the boss of the playground now?

Let’s look at the Croatian numbers to 10:

Apart from memorizing number-words to 10, you will need to memorize a few more number-words to be able to build all the other numbers in Croatian. These number-words are a hundred, and a thousand; and if you’re really excited about counting, million, billion and trillion.

Let’s look at what they are:

(Note – the number-word in American English for “billion” differs from the one in Croatian and most of the European languages. For more information check out this explanation on Wikipedia.)

Knowing these fifteen words forms the basis for all the other number-words in Croatian. Now that we’ve got that covered, let’s move on to the next step.

Ok, now that we’ve learned numbers 1 to 10, let’s see how by adding endings to these words we can make and memorize larger numbers.

If you want to count to nineteen, you simply need to take the numbers one to nine and add the ending -naest. This is very similar to English where all the numbers from thirteen to nineteen end on –teen.

As you can see, apart from numbers eleven (jedanaest) and fourteen (četrnaest) where you need to make small adjustments, these numbers in Croatian are quite straight forward.

Number fourteen (četrnaest) may give you some trouble with pronunciation because of the letter group tr. In fact, pronouncing the letter “r” in Croatian is different than in English. It’s, in fact, very similar to how you would pronounce it in Spanish. Croatians also “roll the r”.

Ok, now that you’ve mastered numbers to 19, let’s look at the next set of numbers:

Similar to the English numbers, the Croatian numbers to 90 have the same ending (suffix). So, quite simply, use the numbers 1 to 9 and add the ending – deset (yes, number ten).

Basically, when you’re counting in Croatian, you’re adding “ten” at the end of numbers 1 to 9. Think of it as “multiplying” them by 10.

However, keep in mind that Croatian is still grammatically a complex language, so you will need to make small adjustments to these number-words as well.

Let’s see how you already know the next batch of numbers:

Yes, I did say you already know them. It’s very simple. Just like in English, where you basically multiply each number by a hundred, you do the same in Croatian.

Again, Croatian wouldn’t be Croatian without having to make small adjustments.

Let’s look at these numbers:

As you can see, with the exception of the number dvjesto, all the other numbers are formed by simply adding the ending (suffix) – sto.

Notice that the word for 600 has two forms. Both are correct but šesto is most commonly used. Both are pronounced in almost the same way.

Now we only have one final step to master the numbers in Croatian.

You do the same for numbers over a hundred:

Here’s a little video where I’ll help you practice the pronunciation of numbers in Croatian:

If you want to make larger numbers, you basically need to follow the same rules with the exception of having two words for each number, instead of one:

Numbers over a million:

A little bit about the grammar…

The grammar of the Croatian language is quite complex and it is a topic for another article.

However, because you could see that some of the number-words change their endings, let’s look at why this happens so that it would be easier for you to remember these numbers correctly.

You could already notice that Croatian likes to transform some letters and make some disappear. This is the instance in a number like:

These are some common sound changes in the Croatian language.

But, let’s look at what’s going on in numbers like:

In order to understand this, we need to remember that some Croatian words such as nouns, pronouns, adjectives, and numbers appear in seven different cases and have three different grammatical genders.

The cases change according to the position of each word in the sentence. They also change when words change their count from singular to plural, as is the case with our numbers.

As you could see earlier, a word for a hundred is sto or stotina. The word stotina is feminine, so in order to say two hundred, both the words dva and stotina change their forms into dvije stotine or simply dvjesto.

A similar thing happens in other number-words. As a number-word changes into a plural form, it’s ending slightly changes as well.

For this reason, it’s not dva milijun (two million), but dva milijuna. (Notice that the word milijun is masculine, so the word dva doesn’t change its form.)

Another interesting grammar feature in Croatian is that the numbers over a thousand are in their plural form, as opposed to English.

They are also in their plural form in the numbers over a hundred, but since a shorter form of a hundred is used (sto instead of stotina), you don’t notice the word endings change.

Here’s an example of what it would look like:

Now that we’ve covered all the basics, and you can understand why there are some changes in the number-words, here is a list of all the numbers in Croatian: