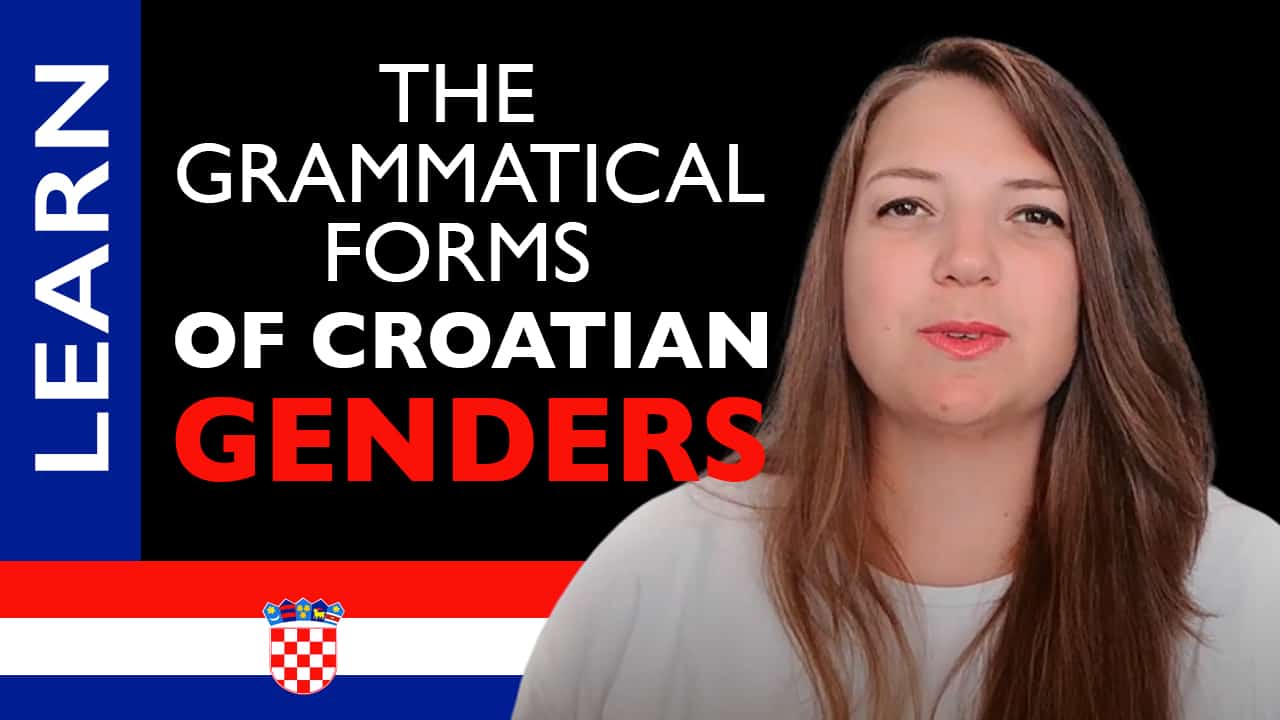 Grammatical gender is a language feature that no longer exists in the English language. However, this is an important aspect of the Croatian grammar which gives a slight headache to the English speakers on a mission to learn Croatian.

What is a grammatical gender exactly? How can I determine the gender in Croatian? Why do I need to learn it? These are some of the questions I’ll answer in this article.

So, let’s start at the beginning.

What is grammatical gender?

Grammatical gender is a grammatical category that appears mostly in nouns (and it affects some other words, as we will see later).

Simply put, when we think of gender in general terms, we think of social gender – male or female. We classify the majority of living organisms into these two categories.

So, what does this mean?

Gender is primarily a grammar feature ascribed to nouns. But, this feature especially affects the words that refer to nouns, such as adjectives or pronouns.

Let’s look at what happens in Croatian.

We will use nouns a ball, a table, and a child. In Croatian:

– a table (stol) is masculine, and

Look what happens to an adjective velik (big), and mali (small) when a noun that follows changes the gender.

As you can see, adjectives big and small change their form and have different endings (suffixes) depending on the gender of the noun that they refer to.

This is why it’s very important to determine which gender is ascribed to each noun.

Note: words like nouns, adjectives, pronouns, and numbers change their forms also when they change the grammatical case, which is explained in another article.

So then, how do you determine the gender of a noun?

How to Determine Grammatical Genders in Croatian

Let’s look at some easy examples.

However, nouns don’t always follow social gender classification. Also, what about objects? A table, a chair, a pen, a ball – which gender would we ascribe to these nouns?

In English, we would simply substitute these words with a pronoun. Wouldn’t it be funny if you would refer to the table as being masculine, and a ball as being feminine?

This is exactly what happens in Croatian. Nouns, especially those referring to an object, don’t follow social gender classification so it is hard for an English speaker to determine what grammatical gender is ascribed to each noun.

Languages that use this noun classification system differ in which gender they ascribe to their nouns.

For instance, a word for a young girl (djevojka) in Croatian will be feminine, while in German the same noun (mädchen) will be neuter.

Do you, then, have to simply memorize all the nouns with their gender?!

Thankfully, in Croatian, you don’t have to! There are a few simple clues that will help you determine the gender of the word. Let’s learn what they are.

Let’s start with the simplest one.

Nouns in Croatian that refer to living things are determined by their natural disposition, as we could see earlier. So, it’s quite simple to determine their grammatical gender.

These are nouns such as:

Note: Notice all these nouns end with an -a?

Note: Notice almost all of these nouns end with a consonant?

There are several ways you can determine the gender of Croatian nouns. Let’s look at each grammatical gender.

A general rule of thumb is that the majority of the Croatian nouns which are feminine end with a suffix -a, in their basic form.

Note: It is important to emphasize the basic form (called nominative) because there are seven different forms in which nouns appear in Croatian. These are called grammatical cases and are explained in a different article.

However, Croatian needs to stay true to its complexity, so here are some exceptions to the general rule.

There are some nouns that end in -a, but are masculine:

Speaking of exceptions to the general rule, the largest group belongs to nouns that are feminine but that don’t end in -a. These nouns end in a consonant (something common for masculine nouns, as we will see later).

Here are some common ones:

These nouns also include a group of nouns that refer to abstract concepts or characteristics. These are easily recognized by their ending -ost.

Another exception appears in male names which end on -a, such as Luka, Nikola, Matija, etc. But, these are common male names in Croatian and, as such, are masculine.

There are maybe 100 of such nouns (exceptions to the “-a rule”) which you will need to recognize. However, when learning to determine a gender of these exceptions, don’t just sit down and memorize a list of words.

This, and other grammar features, are best learned and understood when learning certain phrases or simply by noticing a repetitive form of nouns in different sentences.

You can easily recognize the masculine nouns as well. Nouns that end in a consonant are mostly masculine.

As I have mentioned above, there are nouns that end in a consonant but are not masculine, but feminine.

Also, all the nouns that end in –ost (therefore, end in a consonant) are also feminine, as I have mentioned above.

Neuter gender simply means that nouns are neither feminine nor masculine. These are the nouns that you would refer to as it.

In Croatian, it is simple to recognize neuter nouns. These nouns end in a vowel -o  or -e.

There are not many expectations to the “-o, -e rule”. One exception is some common male names such as Marko, Ivo, Pero, etc.

This is the second time we see that names are exceptions to the general rule. Simply remember that all of the personal names in Croatian (either for people or animals) are either feminine or masculine (names that end in -o are typically masculine).

Feminine and masculine pairs (Two nouns vs. one)

I’ve mentioned earlier that gender is easily distinguished in nouns that refer to humans.

This means that certain nouns that refer to terms which could indicate both genders (i.e. teacher, friend, colleague, etc.) change their forms to reflect the gender they are referring to.

So, consequently, while in English you have one word to express this term, in Croatian you have two, one masculine and one feminine.

When you learn new nouns, you will most likely learn them in their masculine form.

Note: it may be interesting to know that in grammar books genders are always listed in the order – masculine, feminine, neuter.

You can easily transform any of the above mentioned masculine nouns into feminine by adding different suffixes. Usually, this suffix is -ica, but it can also be -ka, -inja, -kinja.

The trouble is that it’s not always easy to determine which suffix needs to be used. However, in the majority of cases, you will use the suffix -ica.

In the table below, you can see all the above mentioned general rules presented for feminine, masculine, and neuter nouns.

Following these rules, it is quite simple for you to determine the gender of the noun in Croatian.

Now, let’s look at how gender affects the grammar in Croatian.

Why do I need to learn about genders in Croatian?

When you learn new nouns in Croatian, it’s not particularly important to know their gender.

However, as I have mentioned above, words that are affected by the grammatical gender of nouns the most are adjectives and pronouns. These change their form depending on the gender of the noun that they refer to.

For this reason, it’s helpful for you to know how to determine the gender of the noun. When you start forming your own sentences using adjectives and pronouns, it will be very important.

Let me quickly show you on these next examples what happens with adjectives and pronouns in Croatian.

When you learn adjectives and pronouns, you will probably learn them in their masculine form.

Adjectives and pronouns referring to masculine nouns only have an optional suffix -i.

The subject in this sentence is a noun restoran and this noun is masculine.

Because of this, the demonstrative pronoun ovaj and the descriptive adjective skup reflect it’s gender – both are also masculine.

So, when is the optional suffix –i used?

The subject here is a noun ticket, which is feminine. Because of this, the pronoun and adjective will also change their form to reflect it.

Both the pronoun and the adjective always have the same suffix (-a) when they refer to feminine nouns, regardless if the feminine noun ends on -a or not.

So, be careful with all those exceptions to feminine nouns when you adjust the form of the pronouns and adjectives.

The pronouns and adjectives referring to neuter nouns will usually have the suffix -o (some cases also the suffix -e), just like the endings of the nouns themselves.

The subject of this sentence is a neuter noun mlijeko (milk), and so, as you know, the demonstrative pronoun ovaj and the descriptive adjective skup will change their form to reflect it.

Once you’ve determined the gender of the noun, use these endings (suffixes) to change the form of adjectives and pronouns:

Note: all of these rules refer to words in their basic form (case) called nominative. Words in different cases (there are 7!) will have different endings.

I hope this article has helped you wrap your mind around grammatical genders in Croatian.

Simply remember that majority of masculine, feminine, and neuter nouns have common endings by which you can tell them apart.

Is there a grammar or language feature you would like to learn about next? Feel free to contact us with any comments, questions, or suggestions! Until then, happy learning, and sretno!