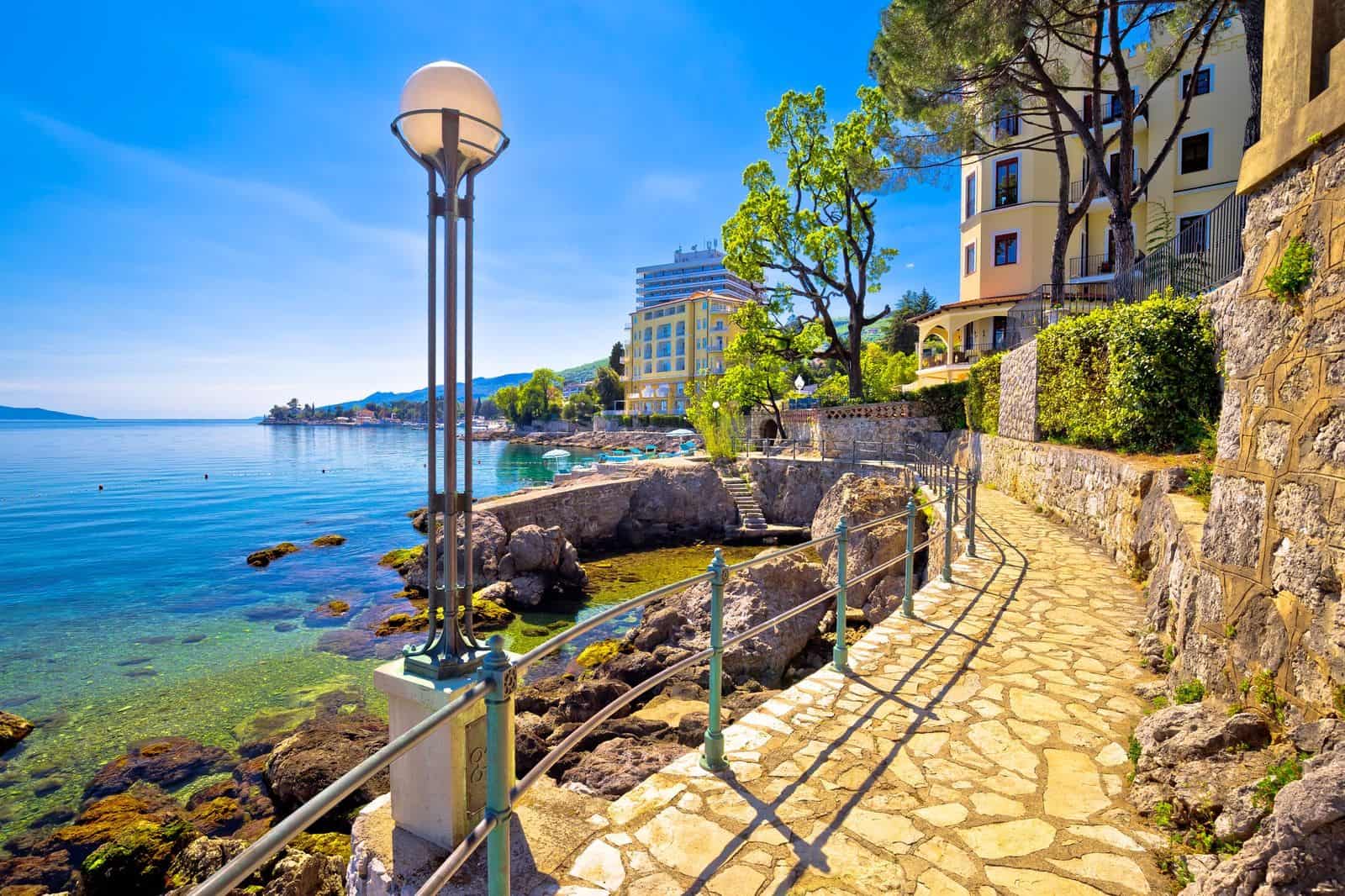 Opatija is a scenic coastal town on the Adriatic Sea. It makes for a popular coastal town in Croatia which attracts tourists from all over the world.

The weather remains mild and pleasant all year round, making this a lovely destination any time of the year. Located at the foot of Mount Učka, it is also a great destination for hikers and outdoor lovers.

Let us explore some of the best vacation spots and things to do in Opatija, Croatia.

This might not have the same pizzazz as the one in Hollywood, but it’s definitely worth a visit. The Croatian Walk of Fame was launched in 2005 by the Apriori Communications agency as a tribute to all those people whose hard work in sporting, scientific, cultural or artistic endeavours have contributed significantly to the worldwide promotion of Croatia.

Maiden with the Seagull

This is the most famous statue in Opatija. Maiden with the seagull is a tragic symbol of the Kvarner Gulf.

The tragedy is traced back to 1891 when a local count by the name of Arthur Kesselstadt lost his life in a springtime storm. This statue was erected in remembrance.

This statue is a new one the work of a sculptor Car, the original one is now in a museum.

Opatija is actually one of the oldest tourist spots in Croatia and was once a resort for the higher strands of society. Here you can get acquainted with the city’s history and also why this town has continued to attract visitors for so many decades.

Visit the Villa Angiolina, a former summer residence and today the seat of the Croatian Museum of Tourism. Here you can relive the memories of the glorious past through exhibitions, workshops and projects.

Stay at the Oldest Hotel on the Adriatic Coast

Hotel Kvarner is the oldest hotel on the east coast of Adriatic and was opened in 1884 as the first luxury property in Opatija. Hotel Kvarner was the only public accommodation of its type on the coast.

The hotel was nominated in 2014 and is as modern as it gets. The hotel is pretty opulent and the prices are too. The Crystal Ballroom was one of the most famous locations in town.

It has hosted numerous functions and events all through these years.

Stroll on the Promenade

The Lungomare is a lovely seaside promenade that extends along the coast of Kvarner Bay. It is 12 km long and while the entire stretch might be too ambitious for a stroll, a short walk is certainly recommended.

Admire the view of magnificent historical villas and other spectacular pieces of 19th-century architecture while you walk by the sea. Lungomare has always been a favourite with the locals and tourists and it is also the motif of countless paintings and art.

St. James Park is located right in the middle of the city and is a major landmark in town. If you want to take a breath and be amongst nature, this is a great place to visit.

The well-manicured lawns and the colourful flowers will most certainly rejuvenate you. The park is distinguished by its neo-baroque fountain with sculptures of Helios and Selene.

There is a combination of stone and greenery in this theatre which makes this a one-of-a-kind theatre.

One of the most beautiful and celebrated parks in Croatia, Angiolina Park deserves a visit. The Camilia readily thrives in this park and has become a kind of city flower.

Opatija is one of the oldest tourist spots in Croatia and definitely deserves a visit. It has lots to give to its tourists and can be an enthralling city to explore.